SOUTH BURLINGTON — For Rep. Peter Welch, D-Vt, it is paramount the federal government see the country through the rest of this pandemic by providing additional monetary aid.

He underscored the importance of additional COVID-19 relief from the federal government during a visit Oct. 20 to a South Burlington Holiday Inn, which for the last six months has acted as a shelter for Chittenden County’s homeless population.

Since April, approximately 250 individuals have come through the doors of the hotel. The shelter, which is operated by the Champlain Valley Office of Equal Opportunity, will have to close Dec. 31 if it does not receive more funding.

Much of Chittenden County’s homeless population was moved from traditional homeless shelters, where social distancing is nearly impossible, to isolate hotel rooms across the state at the onset of the COVID-19 pandemic.

By June, 2,000 Vermonters were housed in hotels by the state.

The Holiday Inn in South Burlington is currently housing 142 individuals and families, making it the largest shelter in the state.

Executive Director Paul Dragon said CVOEO didn’t waver when they got a call from the state back in March asking if they would help.

“We leaned right in,” Dragon said. “I am extremely grateful for the staff here and what we’ve been able to accomplish over the last six months.”

Taylor Grimes, a case worker with CVOEO, said the setup at the hotel is ideal, because individuals staying there have access to centralized resources.

Each resident is paired with a case manager who helps with applications for housing, food stamps and social security benefits. Socially-distant classes are held in the hotel’s conference room on topics like renter’s rights and substance use.

“Everyone here has been compassionate and understanding,” one resident named Emily said. “They keep us from slipping through the cracks.”

Another resident, Pamela Williams, said she feels it’s important to break the stigma around homelessness. She previously attended school, had a job and paid taxes, but an unfortunate circumstance led her to ask CVOEO for help.

Since it’s transition into a homeless shelter, the Holiday Inn has seen no cases of COVID-19. Dragon said the chance of contracting the virus in a typical shelter would have been much higher, and therefore this facility is of the utmost importance.

In March, the Coronavirus Aid, Relief and Economic Security (CARES) Act was passed by Congress. The bill distributed $2.2 trillion to state governments for further distribution, but with limitations.

That funding, of which CVOEO was a recipient, must be used by Dec. 31. If Congress does not pass another aid bill, Welch said, many programs, like CVOEO’s shelter at the Holiday Inn, will no longer be able to continue.

He outlined two steps for the federal government to take as soon as possible:

Congress has struggled for the last several weeks to come to a consensus on a new stimulus package. House Democrats passed a $2.2 trillion package Oct. 1, but Senate Republicans are wary to spend over $1 trillion, according to an Oct. 20 Washington Post article.

While Welch said he hoped an aid package would be passed by Congress before the election, he thought this unlikely.

“It is the responsibility of the federal government to be the financial backstop,” Welch said.

If neither of Welch’s demands are passed by the end of the year, CVOEO will have to relocate the hotel’s residents to other shelters, Dragon said. This will be difficult, given that Chittenden County is already low on shelter vacancies and affordable housing. 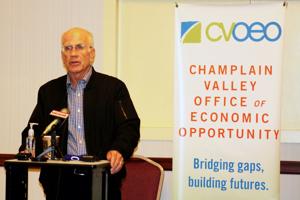 Be the first to comment on "Welch: “It’s my job to get you the funding. It’s your job to stay safe.”"