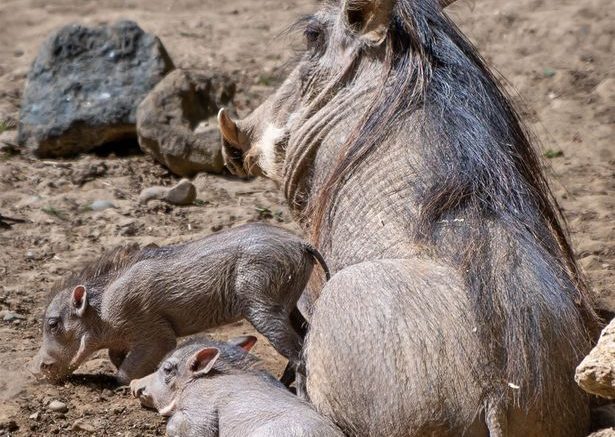 The popular attraction in Colchester, Essex confirmed the news on Thursday (April 29) afternoon that they have welcomed two baby warthogs to their ever-growing family last month.

The piglets were born on March 28 to mum Hermoine and dad Moja.

It is the first litter that the pair have had together.

Since being born, Colchester Zoo explained online how Moja didn’t pay too much attention to the babies to start off with, giving them and mum Hermoine some space.

However, the piglets are a little bit bigger now and have become part of the solid family unit.

According to a Colchester Zoo spokesperson, the babies can often be found at the park snuggling up to their Dad when they are worn out.

At present, the piglets have not been named as it is too soon to know if they are male or female, but they have started to get adventurous and explore the outdoors.

Colchester Zoo’s warthogs eat a diet of fruit, vegetables, hay and pellet to give them all the goodness they need.

Hi, I’m Hope and I am Life Writer for EssexLive.

I love to write all about entertainment news, what’s on, parenting, home tips and more.

Product and venue reviews are also a favourite of mine.

I want to know what you want to read.

The species isn’t classed as endangered and is actually registered as least concern on the IUCN Red List of endangered species.

The Essex zoo hope that the piglets will be the first of many births between Hermione and Moja in the future as they help to maintain their species’ population.

Hermione was brought to Colchester in 2019 to join Moja, who was born there in 2014.

You can find mum, dad and the new piglets at the Edge of Africa on your next visit to Colchester Zoo.

Live updates as Colchester road shuts due to police incident

Essex’s best fish and chips, as rated by TripAdvisor reviews

There was queuing traffic for two miles Essex Live – Colchester…