MONTPELIER — Vaccine rollout within Vermont is expected to continue next week as COVID-19’s growth in the Green Mountain State has appeared to plateau, according to Gov. Phil Scott’s administration.

Here are the key takeaways from the Scott administration’s Friday update.

According to Vermont’s health commissioner, while the number of new COVID-19 cases reported by Vermont’s health department each day remain high compared to what Vermont saw through most of the spring and summer, those numbers no longer seem to be climbing each day.

“There is a lot of fluctuation in the data and they are settling at higher levels than we’re accustomed to here in Vermont,” Health Commissioner Dr. Mark Levine told reporters during Friday’s news conference, “but at the same time, they are not on an increasing trend.”

According to the health commissioner, Vermont’s positivity rate — the percentage of COVID-19 tests resulting in a positive identification for the disease — remains around 2% amid a consistent volume of testing.

Vermont was also starting to see outbreaks in its long-term care facilities.

“Many have more favorable news to offer now, in terms that things have settled down, but obviously this is a particularly distressing part of the pandemic for Vermont as well as everyone else,” Levine said.

As of Friday, 425 cases of COVID-19 have been connected to residents and staff at 11 long-term care facilities scattered around the state, including an outbreak in a St. Albans center where 76 people are now believed to have contracted COVID-19, according to Vermont’s health department.

Officials have said most outbreaks within Vermont’s long-term care centers likely stemmed from staff catching COVID-19 in the wider community before coming to work while asymptomatic.

Vermont, according to Levine, contrasts with the wider U.S., where the daily number of cases reported appears to be growing exponentially in many places.

“We are still being as successful as one can be at being an island in the middle of the continental U.S., and we owe it to the commitment of Vermonters to really thank for this,” Levine said.

According to Levine, a COVID-19 vaccination program involving pharmacies would begin vaccinating residents and staff at Vermont’s long-term care facilities sometime next week.

While state officials planned the next step of vaccination rollouts within Vermont, Levine assured reporters Friday the next phase would “almost certainly involve some combination of people over 65 and people with chronic or immune-compromising conditions.”

Hospitals across Vermont have already received the first doses of a COVID-19 vaccine produced by the pharmaceutical giant Pfizer. In most cases, they have started administering the vaccine to members of hospitals’ respective staffs.

According to Levine, Vermont had preorders in place for 34,000 doses of another vaccine, produced by Moderna, that the Food and Drug Administration would formally approve for emergency use later that day.

Levine celebrated the rollout of vaccinations during Friday’s press conference, telling reporters that, “while we won’t get to watch all the vaccinations… we can keep this in mind: Every time a Vermonter is vaccinated, all of us benefit.”

Scott, on Friday, said the decision to lift restrictions on gatherings between different households and on winter sports would be based on “watching the data and listening to the science.”

“I hope in the coming days and weeks we’ll see these high numbers drop, so we can scale back on some of our restrictions on winter sports and household gatherings,” Scott said, “but to do that, we’ll have to continue to do all we can to slow the spread.”

Restrictions currently limiting most gatherings in Vermont to a single household stem from state contact tracing that found most COVID-19 outbreaks in Vermont came from interpersonal gatherings, like household parties.

As of Friday, Vermont was reportedly monitoring 42 localized outbreaks of COVID-19 and 223 so-called “situations,” incidents where COVID-19 had likely spread between people but where the disease’s spread was not as severe as during an outbreak.

During his opening comments Friday, Scott celebrated Vermonters’ adherence to mask wearing and other public health guidelines intended to slow COVID-19’s spread, but asked Vermonters to continue adhering to those practices.

“What you’re doing is working, and we need to keep it up, because even though a plateau is promising news, the virus continues to spread among older, more at-risk Vermonters,” Scott said.

Editor’s note: This story was updated at 11 a.m. on Sunday, Dec. 20, to reflect the Food and Drug Administration’s approval of Moderna’s COVID-19 vaccine for emergency use in the U.S. 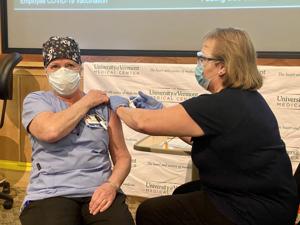 Be the first to comment on "COVID-19 plateaus, vaccines roll out in Vermont: Key takeaways from Gov. Phill Scott’s Friday update"