MONTPELIER – An update from the Scott administration Friday saw Vermont’s governor detail a $133 million COVID-19 relief proposal intended to bolster a state economy wrestling with the effects of an ongoing pandemic.

The proposal, which would earmark $133 million in federal funds allocated by the CARES Act, would come as businesses still struggle with the impacts of COVID-19 and public health orders intended to manage the disease’s spread.

State officials also provided updates on COVID-19’s spread through the U.S. and New England, where cases appear to be continuing to stabilize somewhat following a summertime surge linked largely to states lifting pandemic-related restrictions on business too soon.

The state’s human services secretary also offered details on the state’s reopening plans for long-term care facilities for the elderly.

Here’s what officials had to say during Friday’s address.

1. Gov. Phil Scott and his administration are pushing for a $133 million relief package intended to bolster an economy still struggling with the impacts of COVID-19.

Roughly $50 million would be specifically targeted at restaurants and lodging sites impacted by some of the strictest public health measures enacted during the pandemic, where business owners have respectively reported an 87 percent and 97 percent loss in profit since the pandemic’s start, Kurrle said.

Meanwhile, $23 million would be used to build onto existing grant programs previously authorized by the legislature. The Scott administration is also hoping to expand eligibility to these programs, including lowering a barrier currently limiting access to only businesses that can show a 50 percent loss in profits.

“We were able to expand the program without making changes to legislation, but we heard from businesses, legislators and community organizations that there remain unintentional gaps and some businesses have not been able to access the financial supports they need,” Kurrle said.

The administration is also proposing to use $50 million to send $150 checks to every Vermont household that can be used to purchase Vermont-made goods in local businesses with the hopes the program could spur more local economic activity.

Finally, $10 million would be directed at economic development and tourism marketing campaign intended to draw visitors from “safe regions” during the fall foliage season and encourage visitors to consider settling down in Vermont more permanently.

Funding for the proposal would come exclusively through Vermont’s share of the $2.2 trillion CARES Act, which sunsets at the end of the year.

Scott, speaking Friday, said he understood the state legislature’s hesitance to use the remainder of Vermont’s CARES Act allocation, but stressed businesses had an immediate need for support.

“The reality is we don’t have the luxury to wait until there’s a vaccine, because employers are deciding right now about whether to stay open or shutter their doors for good,” Scott said. “As a result, it’s also left employees wondering what they’re going to do.”

I’ve proposed a $133M package using funds from the CARES Act, which includes critical jobs-saving grants for VT employers, as well as sending $150 to every Vermonter as part of a buy local campaign to spur economic activity that supports local businesses.https://t.co/7jPL6cmK9C pic.twitter.com/uiz8pouD3c

2. Vermont continues to see little spread of the virus even as college students return to the Green Mountain State.

A report from Vermont’s financial regulation commissioner Michael Pieciak continued to show only a limited number of cases of COVID-19 in Vermont even as testing at Vermont’s universities finds cases among incoming college students.

Sixty-one people had tested positive for COVID-19 in the state this past week, a noticeable spike compared to the 39 cases the state reported the week prior.

Pieciak, whose department has managed state modeling for COVID-19 since the pandemic’s beginning, attributed the higher number of cases to returning college students and a significant increase in the amount of testing that accompanied colleges’ reopening plans.

Despite the higher number of cases recorded overall, Vermont’s financial regulation commissioner said that Vermont continues to see the lowest number of cases per capita in the U.S. and continues to have a low rate of positive tests among all tests for COVID-19 taken in the state.

“Even though these numbers are up, our numbers are quite strong compared nationally and we see quite a bit of testing happening this week to help explain that increase,” Pieciak said.

According to Vermont’s health commissioner Dr. Mark Levine, approximately 12 returning college students have tested positive for COVID-19, but, he added, there was “no ongoing transmission on any campus at this time.”

Overall, according to the financial regulation commissioner, Vermont continued to meet its so-called “guardrails” for judging its success at managing COVID-19’s spread.

For syndromic surveillance, or the percentage of hospital visits with COVID-19-like illness and influenza diagnosis, Vermont’s guardrail sits at 4 percent of hospital and urgent care visits being related to COVID-19. Less than 2 percent of visits to hospitals this week involved COVID-19-like symptoms.

The state also looks at the viral growth and reproductive rates, or the case growth measured daily, every three days and every seven days. Vermont’s three- and seven-day growth rates remain below 2.5 percent, well below a “cause for alarm,” according to state officials.

Vermont also gauges the disease’s spread according to the percentage of tests resulting in positive cases, with a “guardrail” set at a positivity rate of 5 percent. Less than 1 percent of all tests in Vermont are currently resulting in a positive diagnosis for COVID-19.

The state also measures the availability of critical care hospital beds. While the state regularly reports available hospital beds hovering near its 30 percent “guardrail,” the limited spread of COVID-19 according to the state’s other “guardrails” typically leads officials to not stress this final metric.

3. According to financial regulation commissioner Michael Pieciak, cases in New England and in the U.S. more generally appear to be leveling off following this past summer’s surge.

An updated state travel map showed another 700,000 residents from counties around the Northeastern U.S. would be able to travel to Vermont without triggering travel restrictions that require incoming travelers to self-quarantine for 14 days upon arrival.

That update, according to Pieciak, was emblematic of a wider trend of COVID-19’s summer surge largely leveling off through much of the U.S. and even declining in the country’s embattled southern states.

“There is some good news on the national front,” Pieciak said. “Cases do continue to slope down from their peak about four or five weeks ago.”

Within the Northeastern U.S. in particular, the number of new cases reported this past week fell by 10 percent compared to the week prior, falling to a level of new cases that hadn’t been reported since early July, according to Pieciak.

Within New England, cases appeared to be declining in Massachusetts, while the coastal states of Connecticut and Rhode Island continued to see a steady spread of the disease, Pieciak said.

According to Vermont’s human services secretary Mike Smith, Vermont’s long-term care facilities have had guidance in place since early summer governing when those facilities could welcome visitors.

The guidance, divided into several phases, is based on the amount of cases of COVID-19 reported within a long-term care facility and on the spread of COVID-19 within the outside community. As community outbreaks subside and weeks pass without cases in a facility, that facility can allow for more visitation.

“We’re being vigilant and careful as we ease these restrictions,” Smith said.

According to Smith, facility-wide testing in the state’s long-term care facilities had identified two cases of COVID-19 in residential care facilities this week: one in Middlebury and another in Shelburne.

Phase I: There is no substantial spread of COVID-19 in the wider community and it has been 14 days since someone in the facility has tested positive for COVID-19. Residents can meet with up to two “nonessential visitors” in an outdoor setting.

Phase II: There is no substantial spread of COVID-19 in the wider community and it has been 28 days since someone in the facility has tested positive for COVID-19. Residents are allowed to meet with up to four “nonessential visitors” in an outdoor setting and there can be some communal activity, like eating.

Phase III: There is no substantial spread of COVID-19 in the wider community and it has been 42 days since someone in the facility has tested positive for COVID-19. Indoor visitations are allowed so long as visitors are masked and social distancing guidelines are followed. 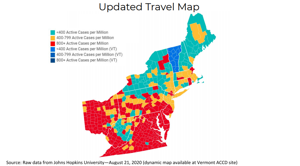