MONTPELIER — After the second full week of COVID-19 vaccinations being administered in Vermont, the health department reported that a total of 11,157 people in the state have received their first dose through Dec. 29.

Before a Christmas lull, the state had its busiest day Dec. 23 when 2,137 vaccines were given. Only 172 doses were administered Dec. 26, but then an average of 976 were administered each of the following three days — just one less than the overall average of the first 14 days the vaccine has been available.

People ages 35-49 have received the most doses, 3,086, as 3% of people in the state who fit that range have done so. Just 1% of the state’s population that is 65 years old and older had been given the vaccine through Dec. 29.

Of the 6,782 doses administered throughout the state in the second week, 1,341 went to those who live in Chittenden County. Through Dec. 29, 1.4% of Chittenden County, 2,472 people, had been vaccinated.

Through the first two weeks, Chittenden County is seeing that an average of 177 people are vaccinated per day. However, that figure includes zero doses being administered both Dec. 25 and 26. 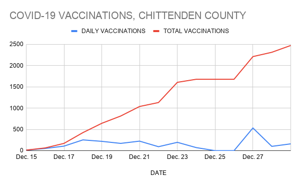 Be the first to comment on "BY THE NUMBERS: Here are the latest state and county figures of COVID-19 vaccines administered"