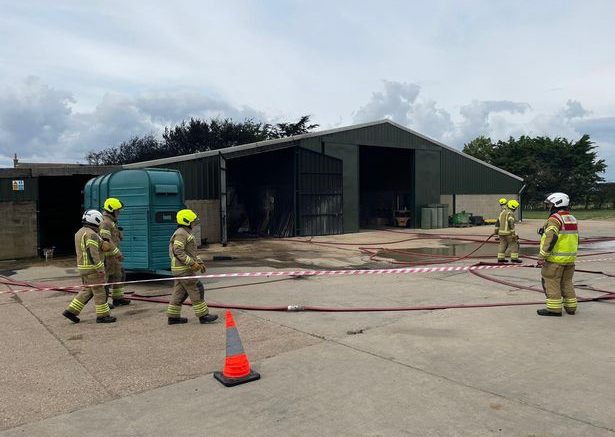 Essex fire crews are investigating an Essex barn fire after 1000 litres of waste oil leaked on the ground.

Firefighters were called to the incident at lunchtime after a farm building broke out on Little Clacton Road, Great Holland.

The building, which contained a number of cylinders and 1000 litres of wastewater, was completely on fire.

Seven fire crews in the surrounding area were called, and they managed to extinguish the fire by 1.30pm.

Firefighters are still on the scene to ensure that all wastewater from the fire was contained and ensure all the hotspots were completely extinguished.

An updated statement from the Essex Fire and Rescue Service has been released:

The post read: “Firefighters were called to a farm building alight in Great Holland this lunchtime (Tuesday 27 July).

“When fire crews arrived they reported that the building, which measured approximately 30m x 40m, was completely on fire.

“Firefighters surrounded the building and used a number of hoses to tackle the blaze. The building contained a number of cylinders, and approximately 1000 litres of waste oil which had leaked onto the ground. Firefighters ensured that all waste water from the fire was contained so didn’t pose an environmental risk.

“Firefighters managed to extinguish the fire by 1:30pm. Crews remained on scene to ensure all hotspots were completely extinguished.

“An investigation will take place to find the cause of the fire.”

Want the latest Essex news direct to your inbox? Sign up here.

Live updates as Colchester road shuts due to police incident

ADVERTORIAL: If you want rural living with urban convenience then look to Brentwood